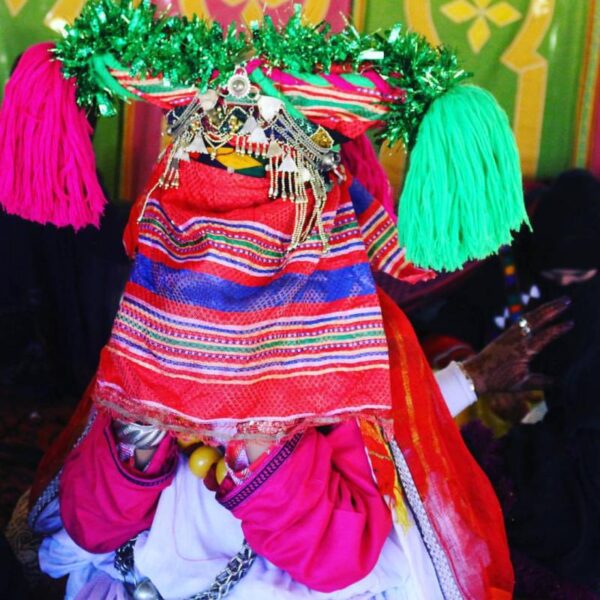 Morocco is a romantic country and one filled with legend. One of these legends, a love story, has resulted in what is known as the Annual Festival of Marriage. The festival takes place in the town of Imilchil, in the Middle Atlas Mountains, every September, and goes on for three days.  If you are in Morocco over this time, it is well worth a visit.

So what is the legend?  Well, a long time ago a young boy and a young girl from two different tribes in Morocco fell in love.  Their love was forbidden as the families were sworn enemies.  The couple could not bear to be without one another but were unable to disobey their parents.  Tribal tradition in Morocco was very important, and still is today, although today it is a much more tolerant society.  But this was a long time ago, and the marriage was forbidden.

What did the couple do?  They cried and cried and cried so much that they cried themselves to death.  Their tears combined two lakes.  The girl’s lake was called Lake Tislit.  Tislit means ‘bride’ in the Berber language.  The boy’s lake was called Lake Isli.  Isli means ‘groom’ in the Berber language.  These two lakes are still around today, attracting many visitors including many lovers! They are romantic, they are heartbreaking and they are beautiful.  And they are where the Festival of Marriage takes place.

Who started the Festival of Marriage?  According to legend, it was the parents from the two different tribes.  They realised their mistakes and were racked with guilt.  To remember their children, and to honour them and their love, they started the Festival of Marriage or Betrothal Festival, where young people from both tribes could meet one another, and if they chose, marry one another.

It is thought that each year, close to fifty couples get married at the festival.  Many more meet their prospective or future partners.  The festival is vibrant and traditional, and something very special for tourists to witness or be a part of.  The music, song, dance and drumming are all incredible, as are the costumes and clothing, the food and the drink.

Tribes and locals come from all over the country to be a part of this Festival of Marriage.  Young girls are accompanied by their parents, in true traditional and tribal style. Older women are allowed to make their own decisions.  Many a proposal takes places by the lakes, and you may want to propose to your future partner here too.

We can assist you with transport to the festival and with accommodation in the nearby areas.  The Middle Atlas Mountains are quite beautiful and should be on any traveller’s itinerary.  And if the idea of love, legend and romance are appealing to you, this is one festival that should not be missed.

The Festival of Marriage takes place in September every year. Perhaps you need to buy a traditional Moroccan wedding dress too?